A snake game for the terminal.

A snake game for the terminal. 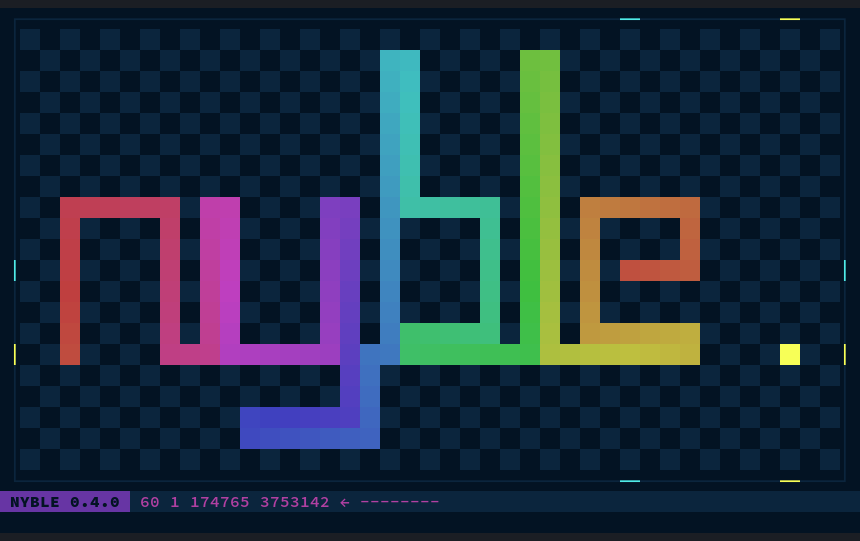 Click the above image to view a video of nyble in action.

nyble is a take on the classic snake game, designed for the terminal using a text-based user interface (TUI).

Currently, when the game starts it drops you into playground mode. The game is started and paused with the <space> key and restarted with the r key. The snake has two control types, 2-key and 4-key. Using 2-key moves the snake either left or right relative to the current moving direction of the snakes head. 2-key is bound to the , . keys. Using 4-key moves the snake in the direction of the key, if the move is possible. 4-key is bound to the <up> <down> <left> <right>, w a s d, and h j k l keys. Quit the game by pressing <ctrl> c.

To make handling the snake easier, the playing grid is checkered, and the border contains guides for both the head of the snake and the egg.

Collecting a golden egg increases the length and speed of the snake.

The snake can travel through each of the 4 golden portals tied to the x:y position of the egg.

Some snake skills being experimented with are:

An embedded language is used to change settings and script the gameplay. Expressions can be entered at the prompt with the : key. The line editor has some helpful features such as parenthesis, bracket, brace, and quote autopairing. It also has an autocomplete function that can be initiated with the <tab> key.

A quick intro to the language: